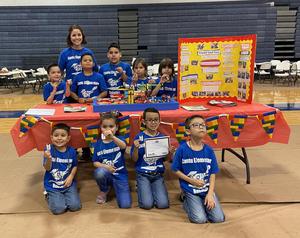 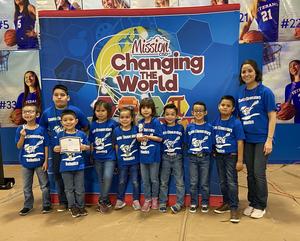 For the first year, Cantu Elementary had a FIRST Lego League Junior team. Students range from kindergarten to second grade. The FLL Jr team, Blue Jay Bots, won the Creative Show Award at the EXPO competition on February 29, 2020 at Veterans Memorial High School. They did an amazing job all season and were proud to tell their parents, judges and the community about their Boom Town Build, WeDo 2.0 programming and their Show Me poster. There was a total of eight schools that participated from Mission.

Students had to create a city using only LEGOs and consider three factors when making their buildings: accessible, durable, and environmentally friendly. Together the team of nine students made a hospital, police and fire stations, school, restaurant with indoor and outdoor eating, store, petting zoo, restroom, ATM, and a street. Most importantly, students learned how to program using the WeDo 2.0 and created multiple robots. The two that remained for the city were an elevator and helicopter. The elevator was able to move up and down and the helicopter rescued a Lego character from the water.

FIRST stands for For Inspiration and Recognition of Science and Technology.